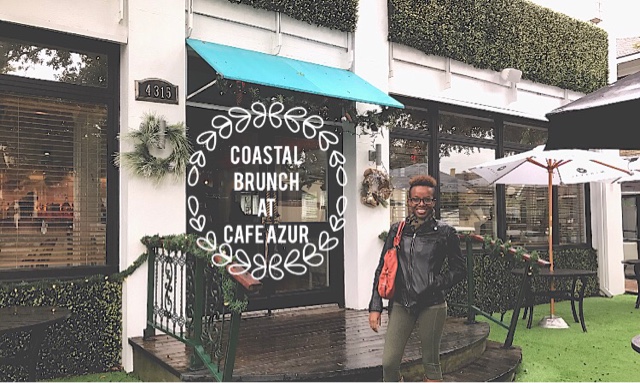 French restaurant Cafe Azur debuted their brunch menu early this month, and I along with some of my fellow bloggers and media folks had the opportunity to experience french cuisine in the heart of Montrose.
Cafe Azur opened a few months ago in what used to be Brasserie Max & Julie, neighboring Pax-Americana. French and Brazilian duo Sidney and Maria Degaine opened Cafe Azur to bring the French Riviera to Houston. Cafe Azur is decorated with a coastal influence, and you’ll feel like you’ve left Houston as soon as you set foot on their front terrace.

The front terrace and upstairs patio floors are covered with artificial grass which compliments the patio umbrellas and greenery surrounding this restaurant. As soon as you enter, you’ll immediately feel taken away to some coastal island. The indoor decorations feature all white walls, with turquoise accents here and there. One of my favorite things about restaurants is the experience, it’s not only about the food. I value the story told the minute I walk through the doors, from the decor, to the choice of music, to the menu and staff; I value all those things. 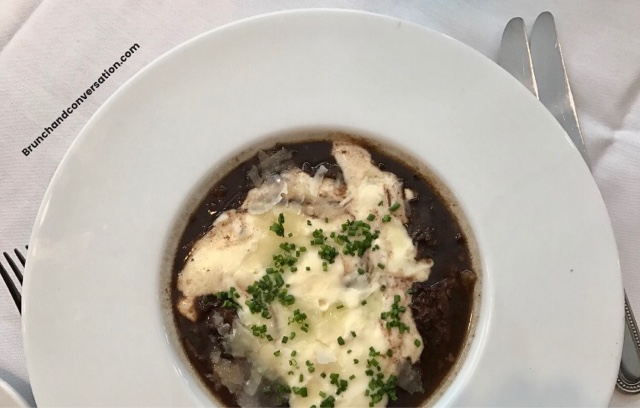 We were invited to sit at a family style table, where we would all chat and get to know one another as we share our love for food. Anyway, after weighing my options I ordered their “Ox Cheek.” It’s slow cooked, with a dauble style sauce, topped with potato foam, *two perfect eggs, parmesan, and truffle oil. (*Disclaimer from the above photo, it wasn’t until I was midway into my meal that I realized there were no eggs). Luckily, the dish tasted perfect without them! But let’s take a moment to talk about Potato foam, what!? I know, I’d never heard of it either, but it was so good. Potato foam consists of potatoes, milk, water, butter and salt pureed finely to create a smooth foam which is called potato foam. Wow. the things you learn!

You thought we were done huh? I had seen Crepes Suzette on the menu and screamed out of excitement when it was decided that we would have it for dessert. I had never had Crepes Suzette before, but could only imagine the flavors. Crepes Suzette is a french dessert made with crepes served in a caramelized sugar, orange, and Grand Marnier sauce, and topped with orange zest. The dessert at Cafe Azur was served with vanilla ice cream and it is to die for. I will be going back and getting it every chance I get! 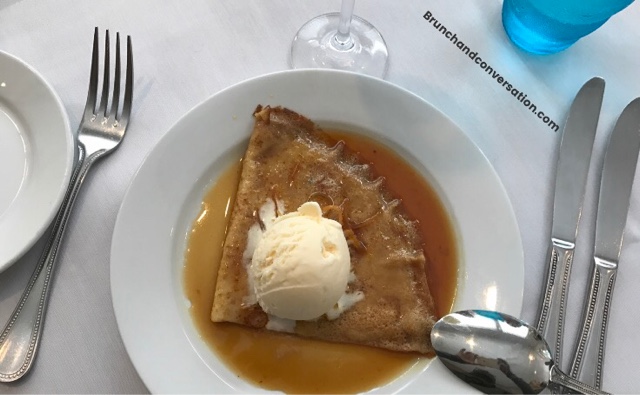